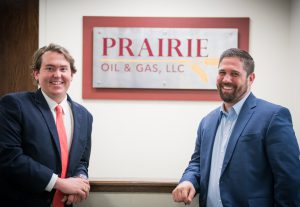 NORMAN, OKLA. – Prairie Oil and Gas is celebrating its two year anniversary this week. The company was founded in the spring of 2015, just as oil prices resumed their eighteen-month slide, destined to bottom out under $30 per barrel in early 2016.

“The timing could have been better,” said Prairie Co-founder Tyler McKaig.

In October 2014, McKaig faced a layoff. He needed a paycheck. During that same period, former colleague and Prairie Co-founder Philip Hobbs was dealt a pay cut. Both sought a better work environment, as they saw room for improvement in handling relationships, communications, and business transactions.

“It was all about doing whatever you had to do to secure a lease, and I didn’t feel like landowners and contractors were being treated fairly,” Hobbs said of the industry.

“It doesn’t cost anything to be polite,” McKaig added.

When McKaig and Hobbs decided to put relationships before profits, Prairie Oil and Gas was born. Three core values provide the foundation that would guide the growth of the business: quality, integrity and drive. Conducting business in line with those values has always been central to the identity of Prairie, and has proved to be key to its success.

Prairie’s first headquarters was a card table in a makeshift bedroom office in Hobbs’ home, where they worked long hours to grow the business without drawing a paycheck.

“It was terrifying and exciting,” McKaig said. “We didn’t borrow any money, and we ended up depleting our savings accounts and floating some bills to get by. I knew once we could stand on our own two feet and become self-sustained, it would be worth the effort.”

“It was a difficult time to start a company, but as we were struggling, so were our competitors,” Hobbs said. “We were getting smaller margins, but there were also less deals out there being offered – so we were able to find small successes during a rough time for the industry.”

Prairie began turning a profit within the year, despite adverse industry conditions. Hobbs and McKaig worked to build a team of talented, hard-working and intelligent people, bringing on key additions who supported their personal approach to business.

Paul Shead was a former coworker and friend. Hobbs and Shead cut their teeth together traveling to county courthouses performing title research.

“We would ride together to various courthouses and dream about how we could one day improve on the way things were done in the industry,” Shead said. “When Philip called and told me about the start-up, I wasn’t surprised, and I was excited to join them.”

Shead would come on as the title manager at the quickly growing company.

“If you look around the company, many of the people here were brought in by friends,” said Chris Franchi, a Landman at Prairie. “There is trust behind every relationship at Prairie.”

Open and honest communications inside and outside of the company are key. No one is ever too busy to return a competitor’s phone call or spend extra time answering a landowner’s questions.

Prairie’s founders designed their standard lease agreement to provide additional benefits and protections to landowners as compared with what is more typical in the industry.

“We forgo the backdoor loopholes that are common in the industry,” Hobbs said. “It’s a more straightforward approach, even though it can put outside interests before our own.”

Ultimately, Hobbs and McKaig wanted to create a workplace where people would look forward to coming in, and a leasing process that would make landowners want to return time after time.

Putting ethics, people and relationships first, the company has grown from two to 32 in the past two years. The approach has paid off; today a large portion of Prairie’s business comes from repeat customers and referrals.

“We treat people with integrity because it’s the right thing to do,” said Hobbs. “When those people come back, or refer their friends and family to us, it’s the kind of business we most appreciate.”

The Prairie Oil & Gas team approaches clients and projects with three key values:
quality, integrity and drive. People and relationships come first, and the company has
grown from two to more than 30 team members since its founding in May 2015. For
more information, visit www.prairieog.com.